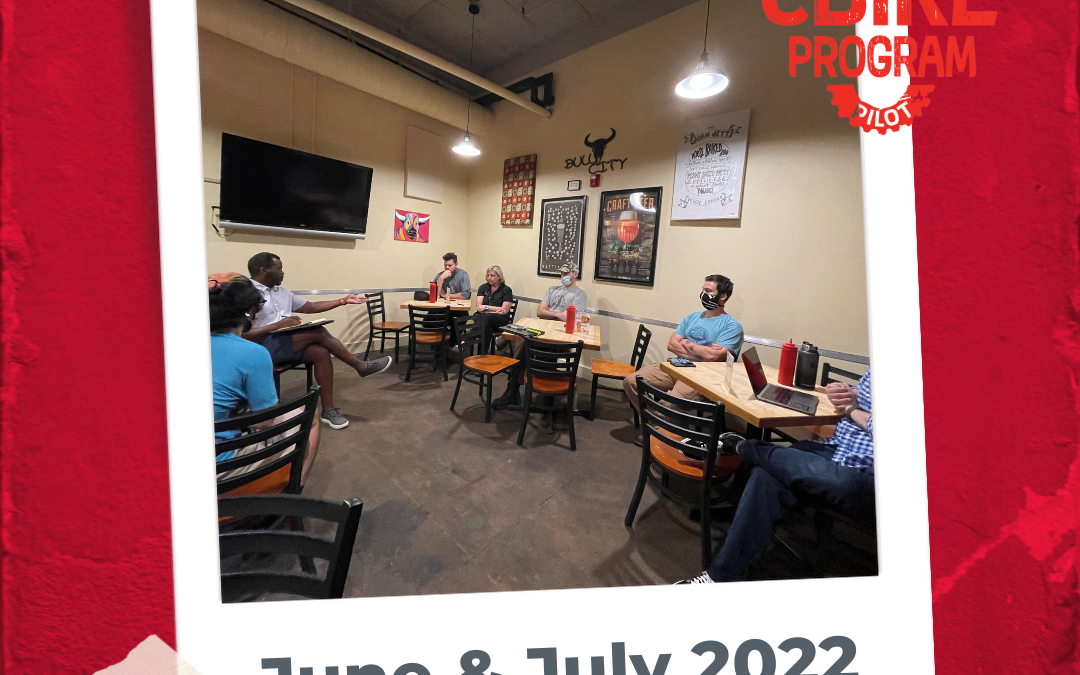 The Bull E-Bike Pilot is preparing for its launch next month and the application to participate is now live! Throughout June and July, the team has made significant changes to advance the pilot within the project’s timeline. The most significant shift is the team’s transition from using the pre-owned e-bikes to purchasing a new fleet of e-bikes. This decision was made due to risk management and liability concerns for the pilot’s participants. The team spent weeks researching the most cost-effective way to bulk purchase high-quality e-bikes that could be delivered within our tight timeline. The selected e-bike vendor was REI. The e-bikes will be delivered in several shipments. In preparation for the pilot’s launch date, a team of 10 bike mechanics will be stationed in the Durham REI to assemble the e-bikes. The City team is excited to overcome this significant hurdle and looks forward to seeing the e-bikes in the coming weeks.

An additional change to our team includes our leadership. In July, we said goodbye to team member 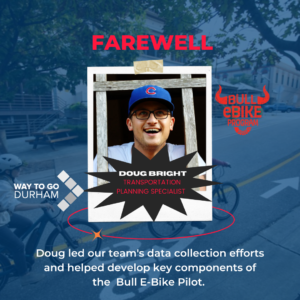 Doug Bright. Doug led the pilot’s research for data collection and worked with the team on day-to-day efforts to design the pilot with a human-centered lens. After much research, Doug developed and secured the city’s partnership with the  National Renewable Energy Laboratory (NREL). The City of Durham will be one of the first municipalities to use NREL OpenPATH, an app that passively tracks trips and asks participants to label what mode they used. The app will be crucial to the Bull E-Bike Pilot’s data collection. We are grateful for Doug’s efforts and wish him the best in his next endeavors!

In his place, we are welcoming Emma Vinella-Brusher. Emma is a third-year Master’s student in the City & Regional Planning and Public Health programs at UNC-Chapel Hill. Her research focuses on providing equitable access to food, healthcare, green space, and other vital goods and services. Emma is excited to build upon her experience at the U.S. Department of Transportation and reduce transportation barriers at the local level in her current home state of North Carolina. She brings her experience with human-centered design processes, technology, and project management. We are thrilled to have her on the team! 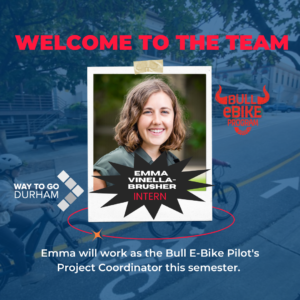 In June and into mid-July, the Equitable Engagement team, Bike Durham, led multiple focus groups at businesses downtown. Bike Durham has identified the attendees’ most common transportation barriers, including high gas prices, expensive parking costs, and working shifts outside transit hours. The team is reviewing the reports from Bike Durham and will use the information to continue developing the pilot’s design to address these issues and findings.

The team has developed a strategic marketing and communications plan to enhance recruitment. The plans listed include developing social media content, creating graphics for GoDurham buses, videography productions, and advertising the pilot through employees’ paper paychecks. We will begin amplifying our social media efforts in August; follow our journey on Facebook and Twitter!

In mid-July, the team finalized the pilot’s application and waivers. The project’s bike mechanic is developing bike shop hours for maintenance and repairs throughout the pilot’s duration.

Shift Up Media has finalized the first of many videos to teach participants about bike safety, road rules, and tips. Additionally, the team is corresponding with NREL to improve the phone app the pilot’s participants will use to track their trips.

The first few weeks of August will be dedicated to getting the e-bikes assembled and housed for the mid-August launch. The team will continue developing the project’s design for the pilot’s orientation and e-bike distribution for the first group of participants.

As part of the requirements for the Bloomberg Philanthropies Mayor’s Challenge Grant, the team will be meeting with Mayor Elaine O’Neal and her team in the next months to provide updates on the project for the stocktake. The team’s first stocktake meeting with Mayor O’Neal took place in February.